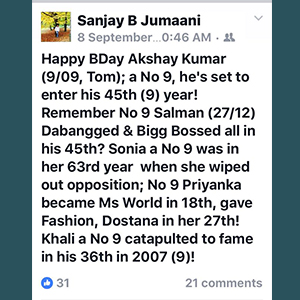 The Prediction is for all to see; FB Memories don't lie, (See Pic) nor does the Zoom TV Link

Before this 'Comeback' prediction was made (he was out of form then hence the word 'Comeback') he hadn't given a single 100 Cr Hit, but he delivered not one, nor two but three 100 Cr Blockbusters the year he was predicted to do well!

On Zoom TV I did predict 2012 (5, Mercury, Virgo Ruler too) to be his comeback year. Click link below:
http://m.youtube.com/watch?v=liPy7gU2kLg

Not only Sultan that released on 6th (how many films release on a Wednesday!) was a huge Blockbuster (300+Crores) he was absolved of both his major cases too in the same 51st (6) year!

His journey from Star to Superstar started too in his 41st (5) year when he also gave Singh Is Kinng (spelt by us too).

Khatron Ke Khiladi added to 5 too.

A No 9, his on & off-screen Chemistry with fellow No 9, Priyancka Chopra (18/7) was there for all to see too
Copyright © 2016 Jumaanis All Rights Reserved | Disclaimer
Site Designed by : Design Dynamics