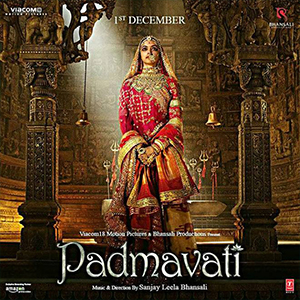 Padmavati-what's her fate is something on many minds
While I have always chosen a clear path and haven't been ambiguous or unclear in the past be it predicting Sanjay Leela Bhansali's Ram Leela or so many other films included the recent Golmaal Again, Judwaa-2 or Ittefaq...

Padmavati-what's her fate is something on many minds

While we have always chosen a clear path and haven't been ambiguous or unclear in the past be it predicting Sanjay Leela Bhansali's Ram Leela or so many other films included the recent Golmaal Again, Judwaa-2 or Ittefaq, when it comes to the controversy laden Padmavati, it won't be an easy task to choose a clear 'white' or 'black'!

Ram Leela by default added to 24 (6, Venus, Entertainment) hence we predicted it to be a Blockbuster.

No wonder then that Ram Leela has been India's longest running Play & oldest form of folk entertainment for old & young alike!

Sanjay Leela Bhansali is also blessed with the power of 24 as he's born on 24th! 6, Venus governed people have luxurious tastes be it music or costumes; they are lavish in their spendings & SLB is no exception.

It means that the person (SLB) is likely to put aside material gains to pursue their wishes & this can be all powerful or indifferent, according to the Will or Desire of the person.

The same is the case here as SLB chose a subject that he was well aware could make heads roll. (in this case, blackened face, burnt sets etc!)

The good news is all the 3 main leads are very well placed!

19/1 would be a second choice, not a disastrous one but if they happen to choose the 26th then matters could get worse as 26th=8, Saturn, the Lord Of Trials! Therefore we had warned SRK from releasing his Magnum Opus, Asoka on a 26th; Destiny had Her way as he didn't pay heed & the film bombed!

For this very reason we have asked the makers of PadMan KriRaj (our clients) to pre-release it a day earlier.

Another client, Aanand L Rai followed the same advice to pre-release Newton a day before a Friday & they are not complaining as not only the Oscar nomination news was timely, it helped the movie make 24 Crores which was like a distant dream otherwise for this genre of film.

My tip to SLB & team-
Keep your mental outlook positive! Lady Luck (read-Deepika Aka, Pamavati) is with you & so are the two Heroes, Ranvir & Shahid!

Signing off, from one Sanjay to another
Copyright © 2016 Jumaanis All Rights Reserved.
Site Designed by : Design Dynamics