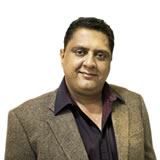 'Sanjay B Jumaani struggled in his sales job for 17 years, ( he started working at 14, alongside doing Junior college ) and could barely make two ends meet. Despite completing targets the rewards would be taken by others. Finally, frustrated with this, he decided to consult his father and was advised to use Sanjay B Jumaani instead of Sanjay Jumani. { Sanjay was a dis-believer before this } What followed in the next 6 months was a roller-coaster change, as the vibrations of his new name made him chuck his job as a marketing executive of seventeen years to take a plunge into the world of Numerology.
He is successfully handling his father's profession and is also in the limelight for all his remarkable predictions; he has been instrumental in changing a lot of people's destiny with the help of the Powerful study of Numerology.

It has been over 15 years since, and Sanjay B Jumaani has broken new frontiers by launching this web site. On Radio since 15 years, he has a two hour weekly programme on a few Radio channels; Radio City 91 FM & MY FM relayed in many parts of India. He hosted a 30 minute TV show called Bolien Ssitare on Sahara One's which was an instant success. Videos of the same are made available on this site too.

Sanjay B Jumaani is the only Numerologist in the world to predict a "TIE" in a one day cricket match between India and Srilanka some years ago. ( "Radio City 91FM" ) 'He is the only person to record a Hat-trick of successful predictions while choosing the winners of the popular TV Show, Bigg Boss. To top it, all the winners were his 1st choices!

Sanjay recalls some of his memorable clients – over 30 childless couples who have now become proud parents after following simple suggestions on name spellings, signature, lucky colours and gems. "These have been the most satisfying moments of our career". Smiles Sanjay.

Sanjay B Jumaani's views are highly respected and appear in various leading newspapers from time to time. When Salman Khan was in trouble due to his alleged involvement in an accident and his exploits in Rajasthan, Sanjay through his Radio programme predicted that misfortune plagued him due to his preference for black colour, which does not suit his number 9. Sanjay suggested him to wear blue, green and beige colours, which would solve his problems. On his mothers perusal Salman wore Blue jeans and white shirt, after which his bail plea was finally accepted. "Colour plays an important role in the fortunes of a person" says Sanjay.

Sanjay B Jumaani also writes columns for leading publications like Times Of India, Filmfare, Ananda Bazar Patrika (No 1 Bengali newspaper in the east),Tathaastu - a U.S based magazine & does a Radio pragramme for Dubai as well as India.

Sanjay B Jumaani was awarded by the Canadian Govt as a World-Renowned Personality & has also been a recipient of the Bharat Nirman Award for being a Super-Achiever in his field.

He has the rare distinction of scoring a Bigg Boss Hat-trick of accurate predictions 3 years in a row, when invited as a special guest by Salman Khan. 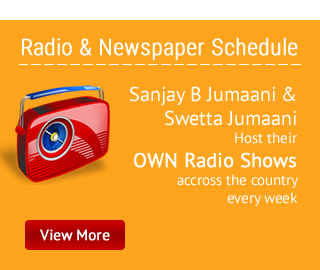