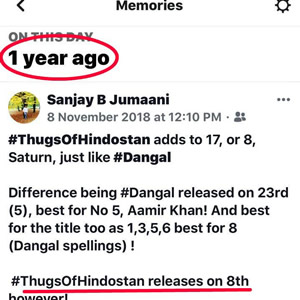 FB memories don’t lie
(Read Pic)
None from our industry (neither any of y'all) may have...

None from our industry (neither any of y'all) may have expected multi-starrer, TOH to be a disaster, with Aamir Khan on the top of his career, paired in a YRF Banner with none other than Big B. The movie was made on a grand budget too But in this pic, the writing is on the wall already

However, Thugs of Hindostan released on the 8th. 17 is a good form of 8, PROVIDED it doesn’t associate with 4 or 8 itself!

Hence, 'Shall be hugely surprised if it does well’ was our take.

Meaning of Number 17-
‘This is a highly spiritual number, and is expressed in symbolism by the 8- pointed star of Venus; a symbol of ‘Peace and Love.’ It is also called ‘the Star of the Magi’ and expresses that the person it represents has risen superior in spirit to the trails and difficulties of this life or his career. It is considered a ‘number of immortality’ and that the person’s name ‘lives after him’. It is a fortunate number if it works out in relation to future events, provided it is not associated with the single numbers of fours and eights'. 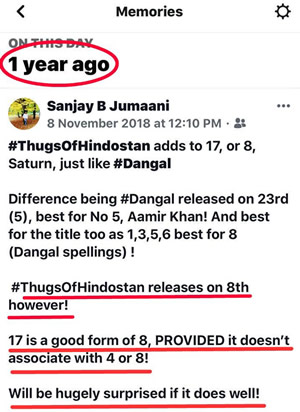 Finally better sense prevails, Bala that adds to 7, one of Ayushmamn Khurrana’s favourable Numbers released on 7th too, though a Thursday, yesterday instead of 8th, today!

It shall do wonders, as predicted days ago, much before I even saw the trailer