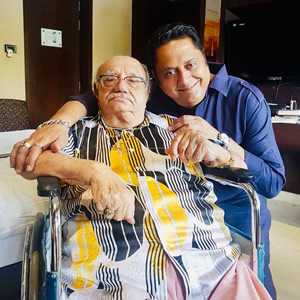 It was simply mesmering to breath the same air as Bejan Daruwalla Sahab, my 'Mooh Bola Baap', literally the baap of our industry!

Can't stop to fathom what an exemplary craftsman he is- a man of distinction and magnificence; yet so humble.

It was simply mesmering to breath the same air as Bejan Daruwalla Sahab, my 'Mooh Bola Baap', literally the baap of our industry!

Can't stop to fathom what an exemplary craftsman he is- a man of distinction and magnificence; yet so humble.

Here's what transpired between us two-
He Blessed me in his signature style, strongly suggesting me to pen a book; I promised will! And told him that even if I attain 1% of what he has in our field, I shall be Blessed He made 5 predictions for me, all astonishingly on the dot!

And also called me a liar when I bluffed wrongly about my Moon Sign!

How could he be so confident? And at the same time humble in saying that ‘I can be wrong’!

Grateful to you Mark Manuel Sir who brought us both together; Mr Mark, you have always been a very good friend who trusted my Heart more than my Art

I would fool myself by saying ‘I could have easily met this Legend whenever I wanted to’! It had to happen at the right time!

The Cosmos must be laughing at my stupid theory of free-will!

If it was not for Destiny and Mark's fondness & intervention, I'd still be needing a stich...

Absolutely clueless about my DOB whatsoever, he recognised that I was a Virgo (Ruler 5) and Jupiter (3) struck, solely by scanning my palms.

The stalwart of his Science made another striking revelation about my life which dropped my jaw in awe! What he prophesied about me was cringe worthy, yet truer than truth itself

That marked the turning point in my life, where I became a slave to his artistry than being merely a fan

Even at 89, despite achieving all that he has, from Indira Gandhi's assassination prediction to the Bhopal Gas Tragedy prediction, words fell apart witnessing his humility & modesty, while he kept persisting after every sentence, "I may be wrong."

We talked about the Cosmos, Black Hole and the unheard mysteries of life...

I couldn't help but notice how bubbly, zeasty & full of exuberance he was, with an energy as contagious as the Big Bang Theory!

All in all, Bejan was full of Jaan!

Lastly but most importantly, can't be more thankful & grateful to my dear friend, Mark Maneul who partnered with destiny to bridge this gathering and left me teary eyed

Video & other interesting stories on what lies ahead for India & the world to follow, stay tuned
Copyright © 2016 Jumaanis All Rights Reserved | Disclaimer
Site Designed by : Design Dynamics