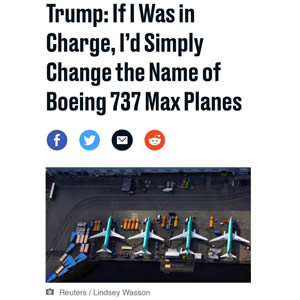 We were much ahead of you In saying that, Prez Trump
M=4, A=1, X=5 so 737+10+8=35; meaning of 35 as per Numerology-
‘This number is full of the gravest warnings for the future. It foreshadows disasters brought about by association with others; run’ by bad speculations, by partnerships unions, and bad advice. If it comes out in connection with future events one should carefully consider the path one is treading.’

4, Uranus & 8, Saturn an extreme mix; while Ethiopian Airlines adds to 4, the ill-fated plane tragically had 157 (13=4) on board! The registration was ET AVJ that further adds to 8!

Can’t forget both the Malaysian Airline Tragedies that were murkily surrounded with the same Numbers!

A lot of messages had flooded my inbox about the ill-fated Airlines that was shot down.

Did u know the date & Day of disappearance?

Very Sorry for the departed souls and their near & dear ones.

Special note for Number 4’s & 8’s-
This however is one extreme side of Saturn (Shani) that can take to great heights as well.

Each Number or Planet has it's own Beauty & Charm!

A R Rehman brought home Oscars in his 44th year, our Coach Gary Kirsten lifted World Cup in his 44th!