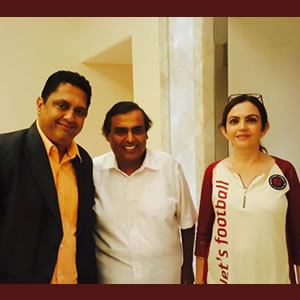 Happy Birthday to the richest yet supremely humble Personality I’ve met; The Corporate King, Trailblazer of a multiple industries & a pioneer in all aspects, Shri Mukesh Ambani Ji

Happy Birthday to the richest yet supremely humble Personality I’ve met; The Corporate King, Trailblazer of a multiple industries & a pioneer in all aspects, Shri Mukesh Ambani Ji
Born on 19th (1) April, 1957, A Number 1 (Sun) by nature, Mukesh Ambani in literal sense is the apex (Number 1) of the magnates! He is also governed by Mars as his destiny number as well as Zodiac (Aries) number are '9'.

They're 2 fiery spheres which possess qualities of leadership!

Call it coincidence or fate; just like Mukesh Ambani, wife Nita Ambani Ji & son Anant Mukesh Ambani are both combinations of 1 & 9. It doesn't end here. The Legendary Dirubhai Ambani himself was a double Number 1 (28+12+1932 = 1)

Even their company, 'Reliance Industries Limited' totals to a fiery, thus fierce '9'. Nonetheless, the fairly recent addition to their group of companies, 'Jio' (Okayed by us) also adds up to '9'. Our only suggestion to people with a power packed combo of 1 & 9 is to avoid partnerships of any kind

When Mumbai Indians were at the bottom of IPL for the first 4 seasons, they consulted us when we suggested to add Gold to their plain Blue jersey as Gold represented their Ruler, 1, Sun (Leadership)

We are proud that they struck 'gold' thrice, now the only teams to pick up 3 IPL Cups so far apart from CSK who incidentally flaunt the colour Yellow represented by the Mighty Sun!'

We call it an honour to have been invited to their son, Akash Ambani's wedding. It was nothing less than a grande fiesta!

Which was on a 9th too, a Number governing their entire family as twins, Akash & Isha are Scorpions while Anant, like his illustrious dad, an Arian!