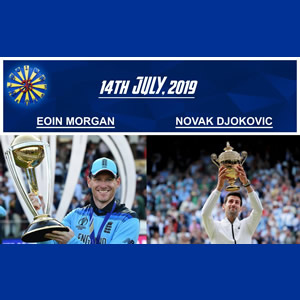 This day certainly can't be forgotten by Sports buffs from around the globe who witnessed nothing but a Marvel-Mania!

This day certainly can't be forgotten by Sports buffs from around the globe who witnessed nothing but a Marvel-Mania!

Well, like always, this time too, numbers had a massive implication on the results of both, the ICC World Cup as well as the Wimbledon Finals!

Shockingly, both are in their lucky period- The Super 33rd (6) Year!

Both Number 5's, on their lucky date 14th (5) July 2019, befriended the impossible to achieve triumph.

Eoin Morgan lifted the cup for his side, whereas Novak Djokovic outplayed opponent Roger Fedrer in a record breaking marathon 5 sets to win his 5th Wimbledon trophy!

Incidentally, the total of 14th July 2019 came up to 24 (6), which was undoubtedly one of their lucky numbers. It does get better. This date belongs to the Cancer Period (7) and as you know by now, 7 is from their family of numbers too!

Speaking of which, Novak won his 16th (7) Grand Slam with this win!