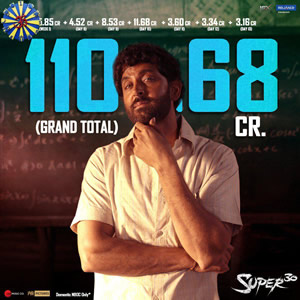 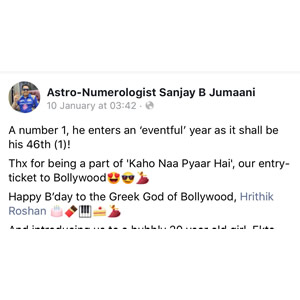 On his birthday, about 6 months ago, we had predicted that Number 1 Hrithik Roshan will have an eventful period since he's entered his 46th (1) Year, one of his very important years. And here he is, more 'Kaabil' than ever!

With due respects, Film Critics predict the same after watching the film, whereas we indicate even before the trailer releases

The Greek God & we share a sublime similarity which not everyone is aware of. A couple of decades ago, way back in 1999, we kick-started our journey along with 'The Then Debutant', Hrithik Roshan. Kaho Naa Pyaar Hai, his Passport to Bollywood was our debut too (Notice the double 'a' in Naa). His success only made us Roshan!

At present he is a little over 30 films old and his career trajectory goes way beyond Super 30! His ongoing blockbuster seems unstoppable despite having Shah Rukh Khan starrer, 'The Lion King' in contention and even 'Kabir Singh', which is at the fag end of its stay in cinemas.

His upcoming 'War' with Tiger Shroff is also releasing in his fortunate period, the Super 46th Year. Even Tiger is in his lucky year, 30th. Furthermore, just like the Mega-Blockbuster URI, War adds to 9 too. 9 indicates fierceness & aggression, which goes in accordance with the genre of the film

Nobody likes war, but this 'War' shall be the most anticipated one!
Copyright © 2016 Jumaanis All Rights Reserved | Disclaimer
Site Designed by : Design Dynamics