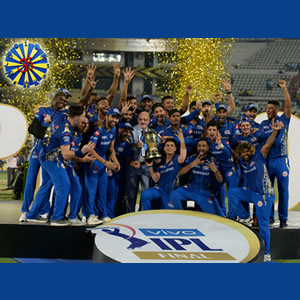 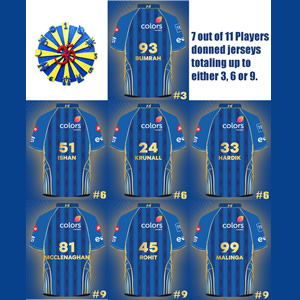 Despite all the wild swings throughout the match, Mumbai clinched a last ball victory that too by 1 run. If this is not about luck, then what is?

Couldn't contain our excitement on seeing our clients, Mumbai Indians prevail victorious in their last night's battle against CSK. We had indicated much in advance that our 'favourite', Mumbai Indians, also our first pick, stood the best chance triumphing over their final encounter.

Find out why we said so-
Have always remarked that '3, 6 & 9' are a family of numbers best suited for each other.

On his birthday, Shri MukeshAmbaniJi, a No. 1 & 9 (Arian) entered his 63rd Year (9) which was said to be a great year for the Corporate King. Thereupon, he not only lifted the IPL trophy for the 4th time, but also acquired the 258 (6) Year Old iconic toy retailer, Hamleys.

At our behest, after adding Gold to their jersey, Mumbai Indians struck gold lifting the IPL trophy yet again; on a Sunday, the day of Sun (Gold/Yellow).

Jasprit Bumrah, a No. 6 & No. 3 (Sagittarius Ruler), wearing jersey number 93 (3) became Man of the Match after his stellar performance. Game changer, Lasith Malinga wearing 99 (Again 9) put forth a breathtaking spell too.

CSK's leading run scorer, No. 9, Shane Watson who wears jersey No. 33 (6) did supremely well for his team too. Though unfortunately his efforts went in vain.

We may not have sweated it out on the field but one can't take away our privilege of being the 12th Man of the squad.