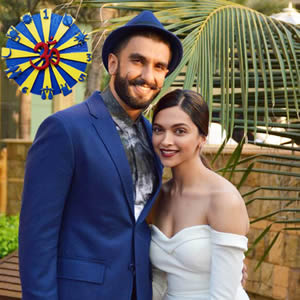 It's not coincidence that they're getting married on their lucky dates

Colossal hit, 'Ram-Leela', the movie that got them together, released on 15th of November too, precisely the exact date they plan to get ‘knotty’!

Hence they chose that very date

We had always been affirmative about their equation and had even predicted it time & again!

Number '6', Ranveer starrer
'Ram-Leela' by default added to '24' (6- Venus, Entertainment), which was directed by Sanjay Leela Bhansali, a Number '6'

#Padmaavat (our spelling) was released on 24th (6), though a Wednesday SLB followed our suggestion; the film crossed 500 Cr

No wonder it has been India's longest running Play & the oldest form of Folk Entertainment for old & young alike!

Not only is Sanjay Leela Bhansali a Number '6', Super Hit film 'Ram-Leela' that was predicted to do well by us, released on 15th (6) too!

Ranveer, who is also a number '7' (Neptune) in his 34th Year (7), is all equipped up to hammer a mark with his upcoming film 'Simmba' (Brought to '6' by us), Directed & Produced by client, Rohit Shetty

Not just that, even his name totals up to '7'. Another of his Mega-Monsterous hits, Bajirao Mastani also summed up to '7'.

Ranveer is a ’Water’ sign, whereas Deepika is an 'Earth' sign. As you all know, Earth & Water are always known to complement each other!

Hoping that this Super-Hit duo's marriage is as successful as their blockbusters! Wishing them lots and lots of luck & many more Prem-Leela's!
Copyright © 2016 Jumaanis All Rights Reserved | Disclaimer
Site Designed by : Design Dynamics