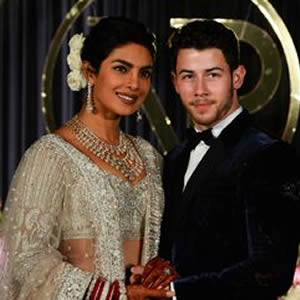 (Yes, click any of the below links to read why)
We are proud (& grateful) that so many from the media carried our story, posting just some of them-

We ask India’s famous Numerologist to throw some light!
‘While I had predicted her marriage when she’s 36 around 13 years ago in Filmfare I have some valuable advice for the newly-wed couple who have been making headlines not only in India!

Number '9' bearing people are governed by Mars, a fiery planet that we can see from the naked eye. This prompts them into leading from the front. Hence, such people cannot play second fiddle. As they rightly say, 'Men are from Mars'. So she'll certainly be the woman on top.

Number 9's being fighters in all the aspects, are forceful & fierce. And hence they do well as leaders or in position of authority.

No wonder, these qualities incline them sooner or later towards politics. I had also said, she would indulge in Politics in or around her 45th Year.

She also gelled with fellow number '9' Akki, who also happens to be a Virgo, like Nick Jonas (16th Sept): Their on and off screen chemistry was for all to see. My advice- Nick should be weary of her dominating, straight forward & impulsive nature (Since Mars is fiery hot).

She's a water sign and such people travel a lot and do very well away from place of birth. Being an Army officer's daughter, she has been travelling quite often and did extremely well building her foundation in Mumbai, which adds up to 9 and is surrounded by water too. No wonder she won the Miss World Pageant abroad.

Both, Priyanka & Nick are Water & Earth signs respectively. Hence they're made for each other. Just like Earth & Water, that always stay together. They have a lot in common too. For instance, Nick adds to '2', whereas Priyanka Chopra & her nickname 'PC', both add to '2'.

They married on the 2nd too!

Furthermore, they are both governed by 2 (Moon) and 7 (Neptune). These planets are more on the mental plane and can cause mood swings. Therefore, Yoga, Pranayam & Meditation are recommended to Nick, whereas Yoga & Exercising to PC. These activities will help her keep calm.’

Coming to the name that she must use, the name Priyanka Chopra unfortunately won’t auger well for her married life, it adds to a number that indicates ‘treachery & deception caused by members of the opposite sex’.

But if she adds her married surname & spells as Priyanka Chopra Jonas, it shall add to a number denoting success & honour!

The meaning of the new name-
‘This number is regarded as fortunate & extremely favourable. It is symbolized as ‘the Sun’ and is called ‘the Prince of Heaven.’ It is a number promising happiness, success, esteem and honour, and promises success in one’s plans for the future.’