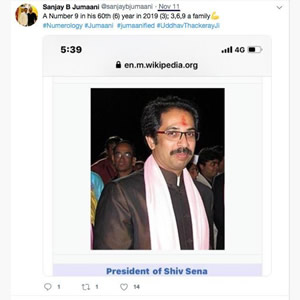 I don't owe allegiance to any political party but two weeks ago, when there a calm before the political storm, I let the Shiv Sena know that their chief, Uddhav Thackeray Ji, was meant to be Chief Minister of Maharashtra.
I reiterated this on social media too.
Read More

Post this political roller coaster, against all odds, situations did take a 𝗨-𝗧𝘂𝗿𝗻 to prove us right!

A Number, Uddhav Ji’s in his 60th (6) year and 3, 6, 9 being a family, I chose Uddhav ji days ago among Fadnavis and others when there was an impasse.

Uddhav Thackeray, a follower of Numerology, is a staunch believer of No. 𝟵 like his great father, Shri Balasaheb Thackeray! Forget Matoshri, even Mumbai was brought by him on Number 9!

With 162 (𝟵) MLAs, Sena-pati Uddhav ji attained this feat like a magician possessed

Rising from the ashes like a Phoenix, Uddhav Thackeray claimed his spot despite all the turmoil and confusion to prove me right!

Maharashtra Politics was indeed the Season 8 of 'Game of Thrones' we all deserved
Copyright © 2016 Jumaanis All Rights Reserved | Disclaimer
Site Designed by : Design Dynamics