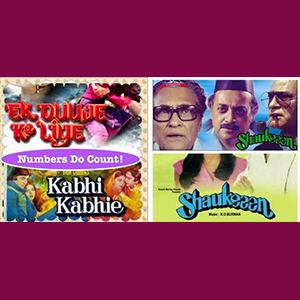 Happy Birthday to another believer of Numerology,Yash Chopra Ji!

Happy Birthday to another believer of Numerology,Yash Chopra Ji!

Ek Tha Tiger on 15th, Sultan on 6th, though a Wednesday!

If you thought it was only the recent crop of biggies like Ekta, Karan Johar, Aanand L Rai etc who are followers of Numerology, you will be surprised to know that the King of romance, Yash Ji had been a believer too.

Proud as it may sound, we Jumaani's are single-handedly responsible to revive this age-old Art of Numerology; however there have been some who had been enjoying the fruits silently!

Shaukeen was actually spelt 'Shaukeeen' by the makers. (See Pic)

Till in came Yash Raj Films (as Distributors); a believer of Numerology, Yashji immediately saw & rectified the glitch- the spellings!

Read on to see how the Legend combined his Greatness with Numbers to emerge the Badshah Producer!

Born on 27/09, Yash ji was governed by No 9, Mars, {energy} & No 6, Venus, (Libra Ruler) entertainment; so great is the influence of Venus {Shukra} on Bollywood that there are more Stars born Librans {like Yash ji} than in any other Zodiac Sign!

3,6,9 are a family of Numbers & Yash ji used these No's in most of the film titles as well as the release dates.

He took a lot of time to come up with the title, Veera Zaara, in fact just days before release, but ensured that it added to 30, RD-12th!

Not counting the Hindi script,(clever!)

No surprise that it was released too on 6th!